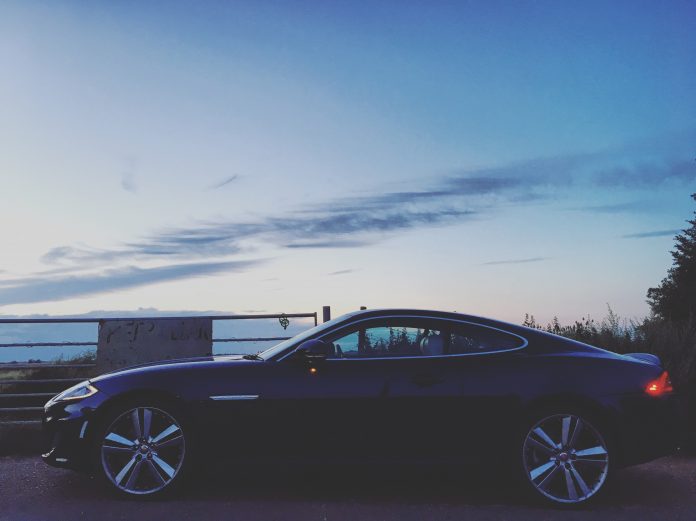 First things first, I need to be careful how I write this piece for two reasons. Reason number 1 – the car is my Step-Father’s and he loves it. It’s his pride and joy and I don’t think he’d appreciate any nasty criticism in his choice of car. Reason number 2 – the car is in fact, for sale, and I am responsible for this… This shouldn’t really be a problem though, because if you know me and my history with cars, a big comfy GT car with a V8 pretty much ticks all of my boxes.

Ever since the original Jaguar XK8 came out back in 1996, it looked good. The curvy bodywork, the sumptuous interior, the original 4.0 litre V8, it was all just lovely. This is the second generation of the “XK” series, the X150 model to be more precise and this particular model is the face-lifted version of that. When the X150 replaced the X100 back in 2006 it was greeted with open arms. It had a new lightweight aluminium body, a much more up-to-date look and a lot of the old reliability issues had been sorted but it still left a few people questioning Jaguar’s success with the big coupe. It came out after BMW had released their hugely reliable 6-series and Mercedes were just about to retire the old W215 CL and replace it with the technologically advanced W216 coupe. Both of which were teeming with new gadgets and modern luxuries. Straight off the bat the XK already felt a bit dated, and due to the lack of new engine (the 4.2 V8 was lightly fettled, but essentially the same lump from the X100 models) and a few other signs of pretty clear cost cutting, it was clear that Jaguar still were not out of the woods with regards to their financial problems. Fortunately this particular model is the later, newer 5.0 litre V8 engined model and a lot of the older, cheaper parts have been replaced. The old gears selector has been replaced by the swanky new self rising rotary selector first seen in the XF and the lighting has been refreshed with the addition of some LED daytime running lights.

As you walk up to the car, straight away you notice its stunning form. From the side it has these broad shoulders protruding from the rear of the doors, covering the wide rear wheels which then slopes down the car, past the vast bonnet to the cat-like front end.

Inside it is exactly what you would expect from a top end Jaguar, soft supple leather seats, walnut dash and a piano black centre console. The roof line is lovely a low (and suede lined) and the driving position is great. The overall feel is actually very similar to that in the 911 – a well positioned steering wheel and peddle box and nothing but huge arches can be seen in the wing mirrors… Obviously the front view is a bit different. I like to sit nice and low, with the seat on its lowest position, but I am also not very tall, so in a car like this all I can over the steering wheel is a massive bonnet covering the XKs 5.0 litre heart.

Put your foot on the break and then press the starter button in the middle and after a second the whole car roars in to life. The rotary gear selector rises up from the centre console and the dials illuminate in a crisp and clear blue hue. The sound it makes on a cold start is music to my ears. I have always been a strong believer that there is no replacement for displacement and if there ever was a car to back up my argument, this was it. Considering this is supposed to be a smooth and sensible grown ups GT car, it doesn’t half sound good! Having driven most of the competition, none of them give you that fuzzy feeling the way this does when you tickle the throttle. Given that this is the standard naturally aspirated model, it still puts out 380 bhp from its engine with a matching 380 lbs ft of torque and it moves quickly enough. 0-62 mph takes 5.2 seconds and the car is limited to 155 mph at the top end which for a comfy cruiser like this, really isn’t bad. Obviously the supercharged XKR model is in a different league but that really isn’t the point of the XK in my opinion. The XK is a perfect candidate for a European road trip or a blast up to the NC500 route in Scotland – It is refined and civilised on the motorways so it can eat up the miles like an S class or its bigger brother, the XJ but then when you get to the fun twisty bits it can hold its own. When they developed this car they took it round the Nurburgring countless times to get that suspension set up right so it could handle hairpins without compromising on comfort. It was never going to be a track weapon, but it is a huge improvement on the wallowy old X100 model.  This was also helped by the huge diet they put the car on when it was developed – the use of lightweight aluminium is obvious if you jump out of an old model in to this, but it’s still heavier than a 911, but are they really competitors… Not in my mind.

Whenever I drive a car, I like to think what kind of journey would suit that car and then would it do it well. I create little scenarios in my head, almost like movies where I am lacing up my shoes, picking up the keys and walking out to the garage and then as the doors roll open, the lights come on and I get in. From that point, it depends on what car I am in. Am I going on an early morning trip to a track to drive angry, or am I heading up a motorway in the late hours of the night trying to cover as much distance as possible without having to take a break. For the XK I imagine myself stepping in to the car whilst it is still dark, no music on the radio, no one next to me in the car, just  a long drive to catch the sunrise somewhere. The way the V8 rumbles as you accelerate and the way the wide rear tyres keep you planted. It all just feels good.

The Jaguar XK is fabulous and beautiful.  If I was in the position to buy this car, I would in a heartbeat. It has so much character and presence. Park it on a busy high street and people will look at it. Park a Mercedes SL or a BMW 650 in the same spot and people will not notice. Its the guy turning up to a bar in the city wearing a bomber jacket when everyone else is wearing grey suits. It’s really bloody cool.

*As stated before, this car is for sale – please go to my contact page for more information.

A Day on the Farm – Isuzu D-Max V-Cross

Last In, First Out…

A Lesson in Luxury – The New Rolls Royce Phantom VIII